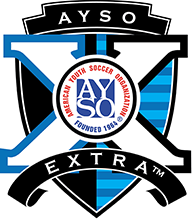 AYSO Region 20 will be offering AYSO Extra program for the 7th consecutive year.  Extra is a program for advanced players ages 9, 10, 11, 12 and 13 looking for more competitive play and increased training.  AYSO Extra will do this while retaining core AYSO values, including minimum playing time (Everyone Plays!) and a strong focus on player development and positive coaching.

Our first year (2011) of the Extra Program in Region 20 saw tremendous growth in ability and success headlined by our 12U Girls team, which won the State Championship!  This past season 2018-19, our 2008 Girls and 2007 Boys teams were crowned Section 1 West champions and will be playing to go to the Western States championships later this season.

Anyone can try out and tryouts are free. Details regarding 2019 tryouts will be posted here shortly.  While it most likely will not be determined (in conjunction with Section 1) until June, it is anticipated that there will be one boys and one girls team in each of the following divisions (10U, 11U, 12U, 13U, 14U).